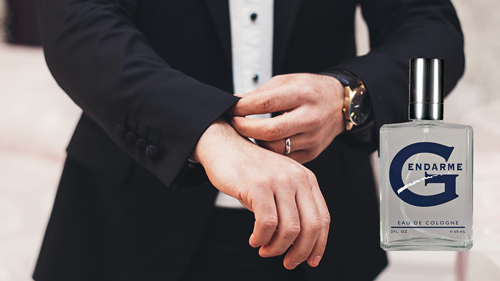 The following was featured on:

Gendarme is one of the top high-quality men’s colognes. This statement may seem to be hyperbole, but truth can be stranger than fiction, even in Hollywood.

Gendarme eau de cologne, to give it its full and proper name, is the original creation of the one and only Topper Schroeder, owner of The Gendarmerie, an exclusive men’s spa just off Santa Monica Boulevard, halfway between Beverly Hills and Hollywood itself, in the neighborhood known as West Hollywood. As an aside, just for your information, Los Angeles Magazine has featured the Gendarmerie as offering one of the “best spa treatments for men.”

Back in 1983, Topper Schroeder needed a fragrance that he could “wear with pride, but without annoying skin irritations or asthmatic reactions”. What started as a scent to satisfy his own personal requirements soon became a popular item among the Hollywood elite, men who need to be well-groomed and elegant every day.

The runaway success of this fresh, citrusy non-allergenic scent among Hollywood’s leading men dovetailed with the success of the Gendarmerie spa, located on Nemo Street, in the area known as West Hollywood. The men of Hollywood, for whom a polished, dapper appearance is a job requirement, come to the Gendarmerie for a full range of services: scrubs and rubs, trims and facials, manicures and pedicures, often topped off with a splash of Gendarme cologne for men.
Gendarme eau de cologne is designed to be subtle. It has a clean, crisp, fresh scent, composed of lemon and lime, bergamot and lavender, with just a hint of jasmine and lilac. It gives the impression you’ve just stepped out of the shower — and the Gendarme scent remains on the skin for a long time – well into the night.
As you might expect, Gendarme men’s cologne is near the top end of the price range for men’s products. However, a travel sized container is available for about half the price of the largest bottle. As befits a scent with this luxurious, glamorous pedigree, the product is packaged in an understated black box with the Gendarme name and logo discreetly presented in white. The bottle reverses the color scheme, with a white label and simple black graphics and text. The most distinctive touch is a sword-slash mark crossing the capital G of Gendarme on the label of the bottle.

Gendarme cologne for men is a luxurious top end cologne with the following features:

This site uses Akismet to reduce spam. Learn how your comment data is processed.

FREE SHIPPING ON ALL ORDERS OVER $75.

All domestic orders sent to residential and business addresses are shipped within 2 business days via USPS.
*Free shipping only applies to addresses in the Continental U.S.

Find an authorized Gendarme retailer near you.

Join Our Only @ Gendarme Newsletter

Get exclusive deals and updates on our products.

Be the first to know about our exclusive items, new products, and special promotions.